Varicocele is a disorder characterized by an alteration of the venous testicular circulation that involves damage to the testicular function. It is a very common disease that affects approximately 15 to 20% of males. This disorder bears great social significance because of its frequency and its consequences: it is the leading cause of infertility, not only for men, but also for the entire couple (adding together the causes of male and female infertility).


The varicocele is treated only after analyzing the symptoms in detail, starting from the general information, the initial symptoms, signs of recognition, relationship with the couple’s infertility, possible effects of varicocele on the decline of testosterone hormones and on the erection disorders and the surgical methods for varicocele. Antegrade Scrotal Sclerotherapy and Microsurgical Ligation are described in details, using photos of the actual conduct of surgical operations. The point is explained with the help of guidelines, international bibliographical references and personal studies of Dr. Maio recently published in national and international conferences.


The testicular or spermatic veins have a long course upwards, up to the vicinity of the kidneys and are provided with one-way valve mechanisms that prevent the blood, little by little until stagnate at the bottom, around the testicle. If there are any predisposing conditions (like absence of valves, course, and/or abnormal outlet of the veins, multiplicity or increased length of the same in young long-limbed persons), one can determine a reflux (reverse flow) within the venous system. Anatomical Diversity facilitates the formation of varicocele on the left; it rarely manifests itself on the right, it is bilateral by approximately 15%.

The wearing out of the veins involves a pooling of blood around the testicle, an increase in temperature and a slowdown in metabolisms of the gonad itself which, in the long run, causes irreversible changes resulting in the possible infertility.

The treatment of varicocele is the interruption of the mentioned reflux. There are several surgical methods of refluxing veins ligation at the sub-groin level, groin level or, further up, in retroperitoneum (laparoscopically), each with its own advantages and disadvantages. It is important to keep in mind that, like with any type of medical treatment, failures are also possible. In the past 15 years, sclerotherapy techniques have been developed with the advantage of being less invasive, executable under local anesthesia and, thus, in Day Hospital. These methods have been perfected and integrated according to the need, in order to obtain a customized treatment with the best results and minimal invasiveness.

The varicocele is a major cause of male infertility and appears at the onset of puberty. It is a very common situation, since about 15-20% of all the children aged 14-15 years and above are the possible carriers.

Having a varicocele does not necessarily mean to be undergoing surgery. About 60% of all Varicoceles which are highlighted at school screenings are not so important as to undergo treatment, at least during adolescence.

Since the incidences of varicocele is very high, exceeding that of male infertility (there are many men with varicocele who have children), and since the age of 18 is not justified to perform the examination of the seminal fluid (Sperm analysis) to evaluate fertility, just those cases where some major forms have been developed are treated during adolescence and are therefore more at risk of developing future infertility. The rest are monitored in time and treated just in case the condition worsens.


How can you realize that you have varicocele?
Cases of Varicocele bearing particular relevance are visible and palpable like it happens with varicose veins of the legs. In this case, the situation becomes much more evident if one stands-up. By palpating funicular-like structures over the testicle while standing and by exercising an abdominal contraction, the expansion in the volume of these veins becomes clear. This is evidence of reflux in the spermatic vein system which is clearer in the standing position and during the abdominal contraction. The subjective relief of a situation of this kind is, almost always, an expression of the presence of a varicocele. However, in the most modest forms it may also not be noticed during medical examination, so much that, in case of suspicious pain or infertility, further investigation is recommended with instruments such the Doppler or eco-color-doppler.

As for those in which surgery is required, please note that currently we have alternative methods to the classic surgery that are equally valid but much less invasive: treatable under local anesthesia where the patient gets discharged after a few hours.


What constitutes an andrological visit?
It is a simple examination of the genital apparatus that is typically performed either by standing position or by lying down, lasts for a few minutes and is completely painless. The youth tends not to go to an andrological visit, because they are not experiencing any trouble or merely because they feel embarrassed. It must be stressed that, at least in young men, the symptoms such as pain in the testicle, feeling of heaviness or discomfort associated with the Varicoceles are quite rare and the discovery of this disorder usually happens during a visit performed by a general physician, a sports doctor or during a a called-up visit.

At least 90% of young people suffering from Varicoceles were examined with the disease during a school screening, while they were completely unaware of carrying the disease. Moreover, we must remember that the testicle has two functions: one is to produce hormones (Testosterone) which serve for the purpose of sexual development and sexual desire, the other is to produce spermatozoa (spermatogenesis), the cells necessary for fertilization. The alterations that occur in the Varicoceles are mainly concerned with the spermatogenesis. This means that a man can have no complaint in terms of sexual performance but, quite unaware, he may have a reduced reproductive capacity. Finally, it should be added that, if the shame could be considered as normal among the teenagers, the same attitude is also expected from older people. In both the cases, making an andrological visit proves to be useful to clear any doubts or concerns about their genital apparatus. In fact, if Varicoceles is one of the most frequently encountered andrological problem, visits to the medical experts during adolescence gives accurate information on the changes of the genital apparatus during the development of puberty. 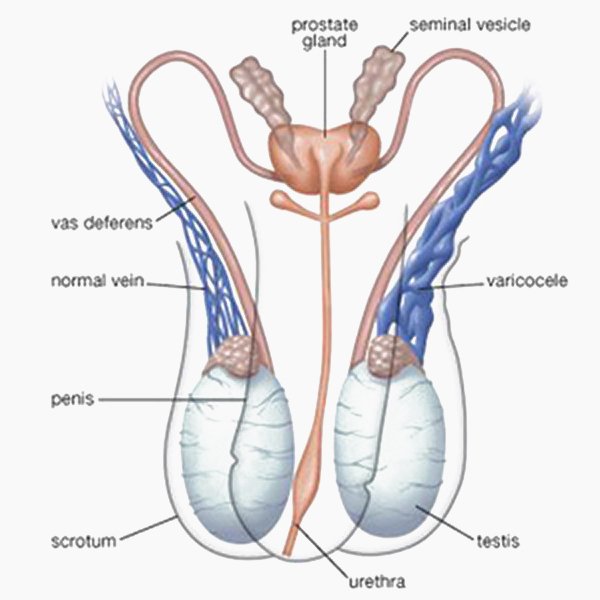