Causes and symptoms of Erectile Dysfunction

Erectile dysfunction (ED) is defined as the inability to achieve and / or maintain an erection that represents a satisfactory sexual intercourse. The term erectile dysfunction is better than the term “impotence” because it defines more precisely the nature of this sexual dysfunction.

Numerous physical and psychological factors are involved in normal erectile function, including neurological factors, vascular, hormonal and cavernosa. Alterations of one or more of these factors can cause Erectile Dysfunction.
For simplicity, Erectile Dysfunction is frequently classified as:
– organic, due to vascular, hormonal or cavernosus alterations as well as neurological injuries;
– psychogenic, due to an inhibition of the central mechanisms of erection in the absence of a detectable organic cause;
– mixed organic-psychogenic, due to a combination of organic and psychogenic factors.

Because of this, a person can have erections with different degrees of rigidity. It could happen to anybody, at some point in life, not to be able to achieve an erection but, the persistent erectile dysfunction, is an infrequent problem under 40 years of age. From this age, however, the incidence rapidly increases to the point that 65% of men aged 70 presents problems of sexual potency. This increase is mainly due to vascular disease and occurs with about 10 years earlier in diabetic men.

Aging in itself does not cause erectile dysfunction, although it certainly involves physiological changes. Many men need greater stimulation of the penis, the erection becomes less stiff and any distraction can result in loss of erection, often difficult to achieve again. The frequency of sex is reduced even though sexual activity remains satisfactory and represents an important element for the sense of well-being.

It is important to emphasize the importance of smoking, hypertension and other cardiovascular problems, diabetes and alcohol abuse.

FAQs:
Can prostate diseases cause Erectile dysfunction?
It generally is inflammations of the prostate (but also of the rectum) that cause a venous-lymphatic pelvic congestion with possible alterations of erectile capacity.
Correcting imbalances of blood sugar in diabetic patient can make Erectile dysfunction reversible?
Many of the effects of diabetes on erectile function are determined by chronic alterations caused by persistent hyperglycemia on the tissues and blood vessels and, therefore, they are not fully reversible. However improving glycemic control is critical to stop or slow the progression of tissue damage.
The Erectile dysfunction can be the alarm bell of other diseases?
Erectile Dysfunction and cardiovascular disease share common risk factors and the prevalence of Erectile Dysfunction in patients with coronary artery disease, myocardial infarction or stroke is very high. It is therefore considered that, in some patients, the onset of Erectile Dysfunction can be the first sign of a cardiovascular condition and that therefore the patient with Erectile Dysfunction should be evaluated for the presence of this condition as well.
Prostate surgeries always cause Erectile Dysfunction?
The radical removal of the prostate (radical prostatectomy), which is performed to treat prostate cancer, is often associated with DE determined by lesion of the cavernous nerves. This, in selected cases, can be avoided by using a technique that allows to preserve nervous structures (technique called “nerve sparing”).
Is it true that the penis is a muscle?
NO. The penis is a complex organ: modifications of its volume and its shape are not associated to the contraction of voluntary muscles, but to variations in the incoming and blood flow in its interior.
Is it true that Erectile Dysfunction increases with age?
YES. Age is the main risk factor for Erectile Dysfunction, but is not itself cause of Erectile Dysfunction.
Is it true that, if I had a heart attack, I can not use inhibitors of type 5 phosphodiesterase?
NO. These drugs are contraindicated if a patient is already taking nitrates, used to treat angina and, often, by patients who have suffered a heart attack, or if the heart attack led to a decrease in cardiac function as well accentuated by making dangerous physical activity connected with sexual function.
Is it true that cigarette smoking impairs erection?
YES. Recent studies show that many components of smoking, including nicotine itself, contrast the erectile activity on the short or long term. Some of these effects may be rapidly reversible after smoking cessation, others are permanent.
Is it true that a penile prosthesis does not allow pleasure?
NO. Penile implants, which are applied within the corpora cavernosa, can play the mechanism of erection, but do not affect other aspects of sexuality such as the sensitivity of the penis or orgasm.
Is it true that Erectile Dysfunction is always associated with deficiency of testosterone?
NO. In fact only a small share of Erectile Dysfunction (less than 5%) are associated with deficiencies of sex hormones; The most frequent causes are those related to vascular diseases or chronic diseases such as diabetes or kidney failure. 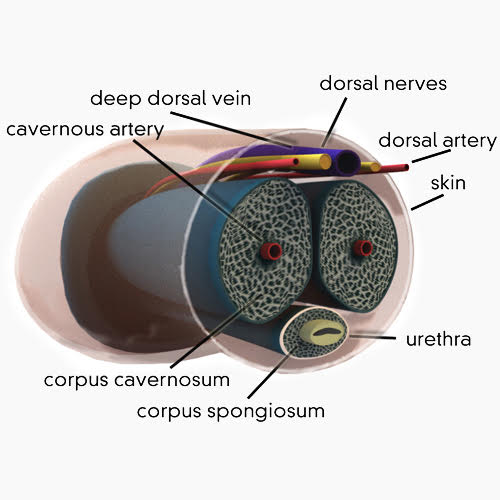